HISTORY OF THE MOVEMENT

Events that have been unobtrusively, yet very effectively, occurring in the district during the last year, promise a means of delivering Upper Lansdowne from a degree of apathy that had seemed to have settled over it, and of restoring the name to its somewhat lost status.

The revival had its genesis in a large public meeting held about a year ago. Dissatisfaction at prevailing conditions was freely expressed thereat, and the outcome was the appointment of a representative committee with a definite mandate to proceed with the construction of a hall suitable to the district on a site agreed on by the meeting.

The immediate district responded to a canvass for donations towards the project by contributing nearly £200, a considerable amount being cash and the balance representing material and labour. The two local sawmills, T R McLaughlin’s and Schubert Bros – generously assisted with substantial donations and other progressive citizens contributed their “tenners” while fives, fours, threes, two, etc., followed in dignified degree down to the modest, yet equally acceptable “coin of the realm”.

The committee promptly acquired the necessary land from Mr Jas. Crittenden, now a residence of West Maitland; but, whose long and varied association with the public activities of the district, in the days that are gone, assured his ready sympathy with the movement.

The unique spirit of enthusiasm and co-operation shown by the people inspired the committee to make their plans accordingly, and the result is an institution probably second to none of its kind in the State. The building was designed by Mr W Fennings, our school teacher, in collaboration with Mr Jas. Ritchie, a local builder of some repute, and the citizens are both pleased with, and proud of the structure.

The decision to designate the building the “Upper Lansdowne Memorial Hall” was the consummation of an oft-repeated wish amongst the people. The foundation stone was laid on 21st February last by Mrs M J Cicolini, whose special war-legacy is somewhat appropriately, if inadequately, acknowledged thereby.

The building is of rusticated weatherboard, ceiled and lined throughout with first quality timber cut at the local mills. The dimensions are 84ft overall, including a main hall 60 x 30, with a 30 x 11 stage. The walls are 14ft. high with a clear height of 17ft from floor to ceiling. A committee room and a meeting room are situated at the front of the hall, the former being 13 x 12, and the latter 22 x 12. This room is designed to accommodate an assemblage of up to 50 persons without necessitating the use of the main hall. Two dressing rooms, 13 x 10 are situated behind the stage and a supper room, 50 x 10, is attached to the side of the hall, with water available and a copper at hand inside, making everything quite convenient and waterproof.

All the woodwork required is entirely “our own make”. The windows, 16 in all, including four fanlights, are specially designed and reflect the usual fine workmanship of Messrs. Atkins Bros. who also turned out some of the doors, the remainder being manufactured on the job by Mr. Ritchie. The doors and windows represent the last word in quality and economy. A good old red cedar from the hillside has at the hands of Mr Vic Atkins exchanged its native grandeur for the more utilitarian beauty as displayed in a set of modern seats that adorn the hall and provide accommodation for a couple of hundred patrons.

The premises will be electrically lighted throughout, the plant being installed by the Manning Motor Co., Taree.

The construction of the building was carried out by Mr Jas. Ritchie, assisted by Mr John McLaughlin. A liberal amount of voluntary labor was also supplied by various handymen. The job is regarded as the maximum in results and the minimum in time and expense.

Although the date of the official opening is still subject to the weather conditions, a preliminary introduction, in the form of a Saturday night social attracted a gathering of over 100 people. A similar function was held since and at a modest admission fee the two nights netted about £10, which suggests the financial stability of the institution.

On those occasions the spacious dancing floor was highly appreciated as also the fine music supplied by local talent. Special reference is due to a high-class item by Misses Fennings and Fritz, violins; Mr Fennings, violin and Mrs Fennings, piano. The community is fortunate in having the talent available to grace the fine premises with appropriate music.

Given reasonable weather, the opening function promises to be something unprecedented in the district. The people were never quite so enthusiastic or unanimous over any local movement before and fairly complete arrangements are in hand. A good programme has been compiled for the day and a concert and ball will be held at night. The concert arrangements are in good hands, and the ball patrons can rely on having a specially good time. 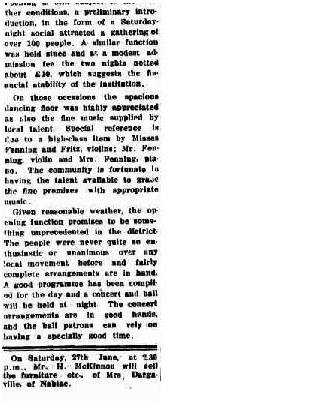