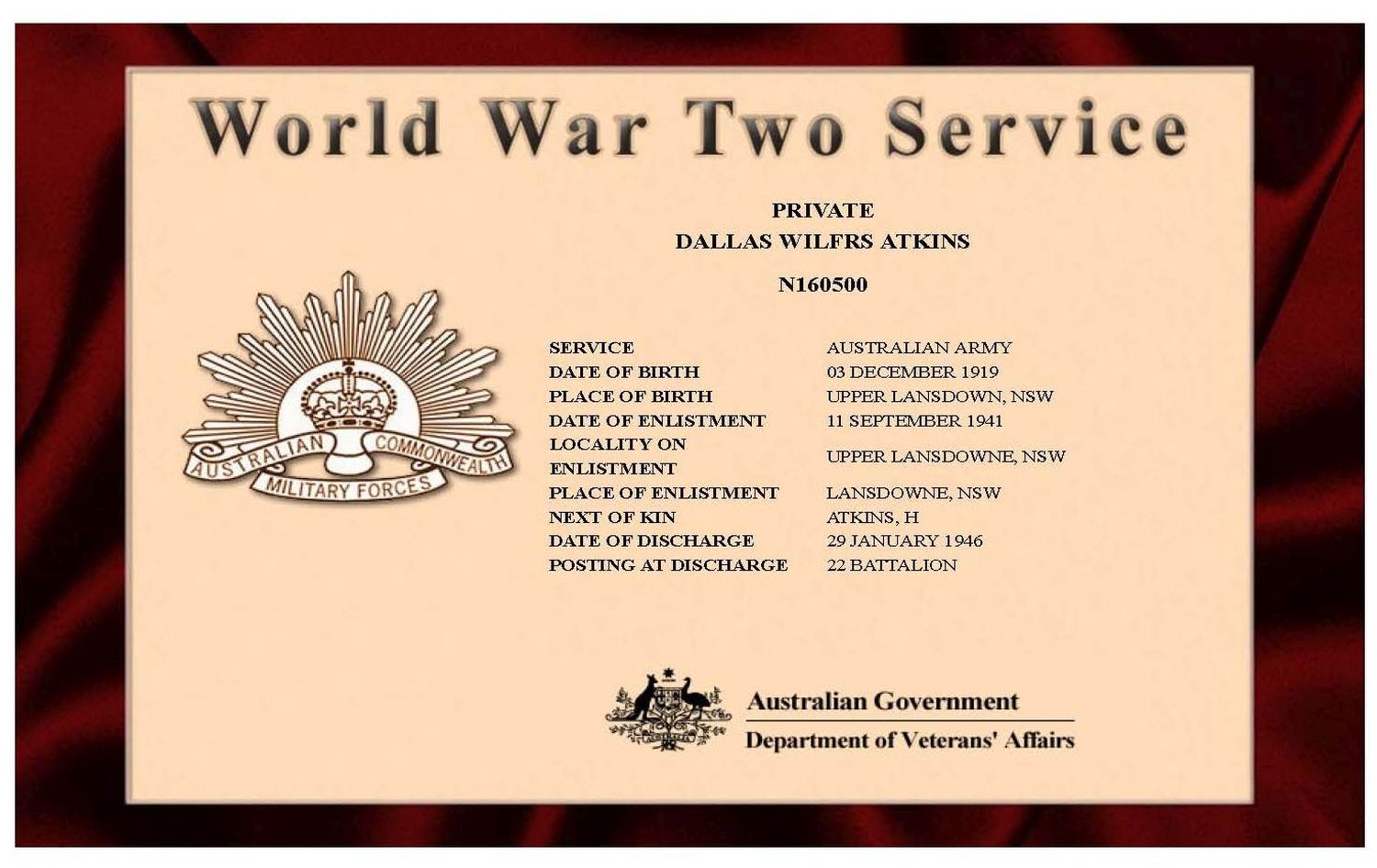 Dallas Wilfred Atkins (known as Snow) was born on the 3 December 1919 in Upper Lansdowne. Snow was one of 14 children born to Hector and Annie Atkins (nee Unicomb) and was raised on the family farm on Koppin Yarratt Road, Upper Lansdowne. Snow attended Upper Lansdowne School and after leaving school worked for various people milking cows. He was aged 21 years 10 months when he enlisted in the Australian Army at Upper Lansdowne on the 11 September 1941 naming his father Hector Atkins as his next of kin.

Early in the war, the 22nd was assigned to the 4th Brigade and undertook garrison duties and training camps in Australia – based mainly in Queensland. In early 1943, the battalion was deployed to New Guinea to take part in the fighting against the Japanese serving mainly with the 5th Division, but also briefly as part of the 9th. The battalion initially deployed to the Milne Bay area in March 1943 undertaking garrison duties and jungle training before moving to Lae shortly after its capture by Australian forces in early September. Later in the month, the 9th Division carried out a landing on the Huon Peninsula, and the 22nd Battalion played a support role, advancing towards Finschhafen overland from Lae, while the 9th Division advanced on the town from the north from their lodgement at Scarlet Beach. In order to relieve the 2/13th and 2/15th Infantry Battalions around the beachhead to free them up for the advance west on Lae, the 4th Brigade had landed to the east of Lae on 10/11 September. The 22nd had then began the pursuit of the Japanese that were withdrawing to the east, marching from Hopoi Mission Station to Finschhafen, with a view to placing pressure on the Japanese southern flank. This feat was described by the Kalgoorlie Miner as the “greatest march” of the New Guinea campaign and in 10 days the battalion covered 50 miles (80 km) of rugged terrain. Later, after Sattelberg was captured, they joined the advance along the northern coast of the Huon Peninsula towards Madang.

In 1944 (while still in the Army) Snow married Ednis Alice Latimore. After discharge from the Army on 29 January 1946, Snow and Ednis moved to Comboyne where they eventually purchased a farm at 134 Koppin Yarratt Road, Comboyne and started dairying. They had 6 children and their son Terry is now running beef cattle and growing avocados on the family farm. Dallas and Ednis lived on the family farm until their deaths. Dallas died in July 2019 aged 99 years.

Information and photo supplied by his son Terry Atkins 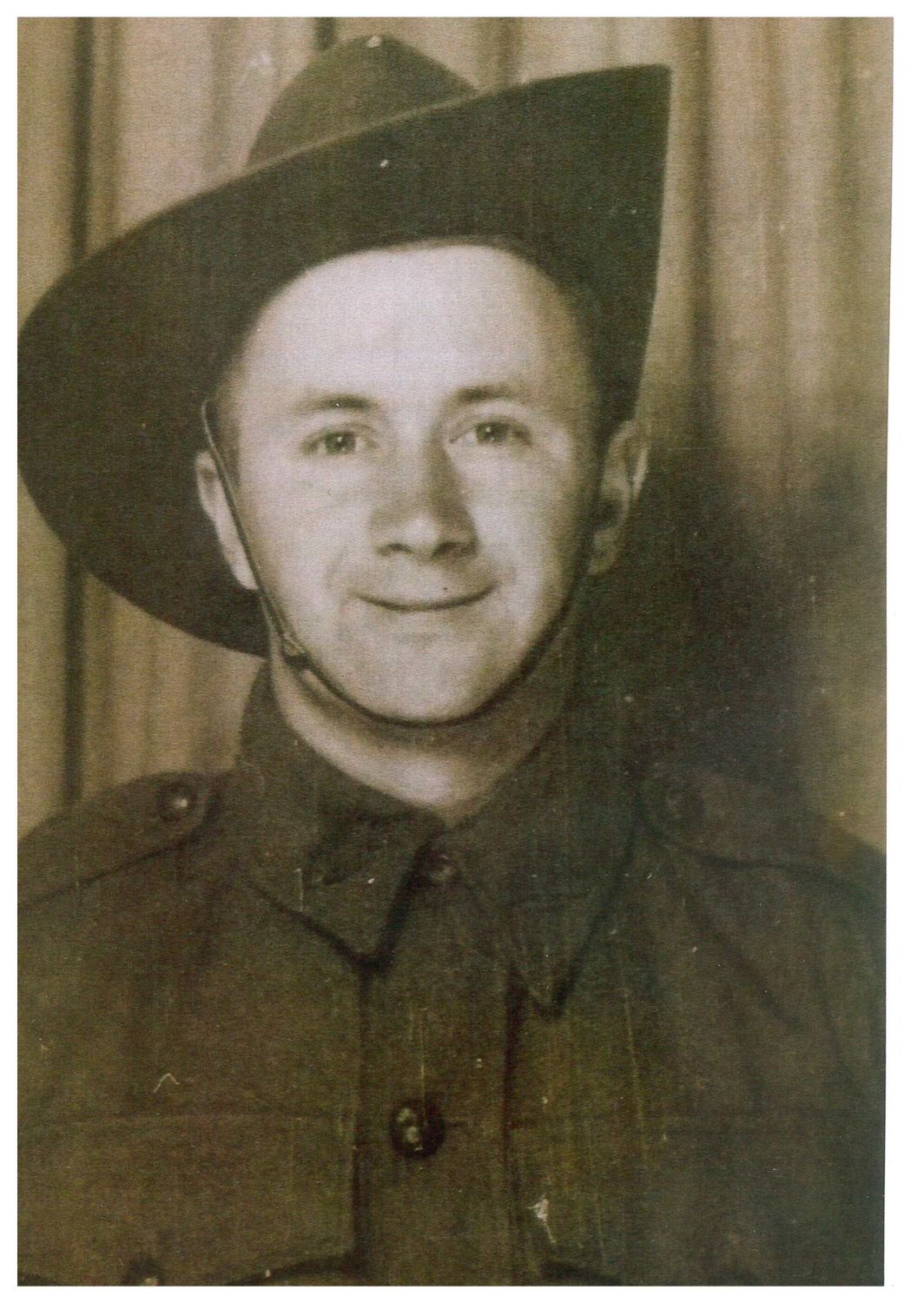 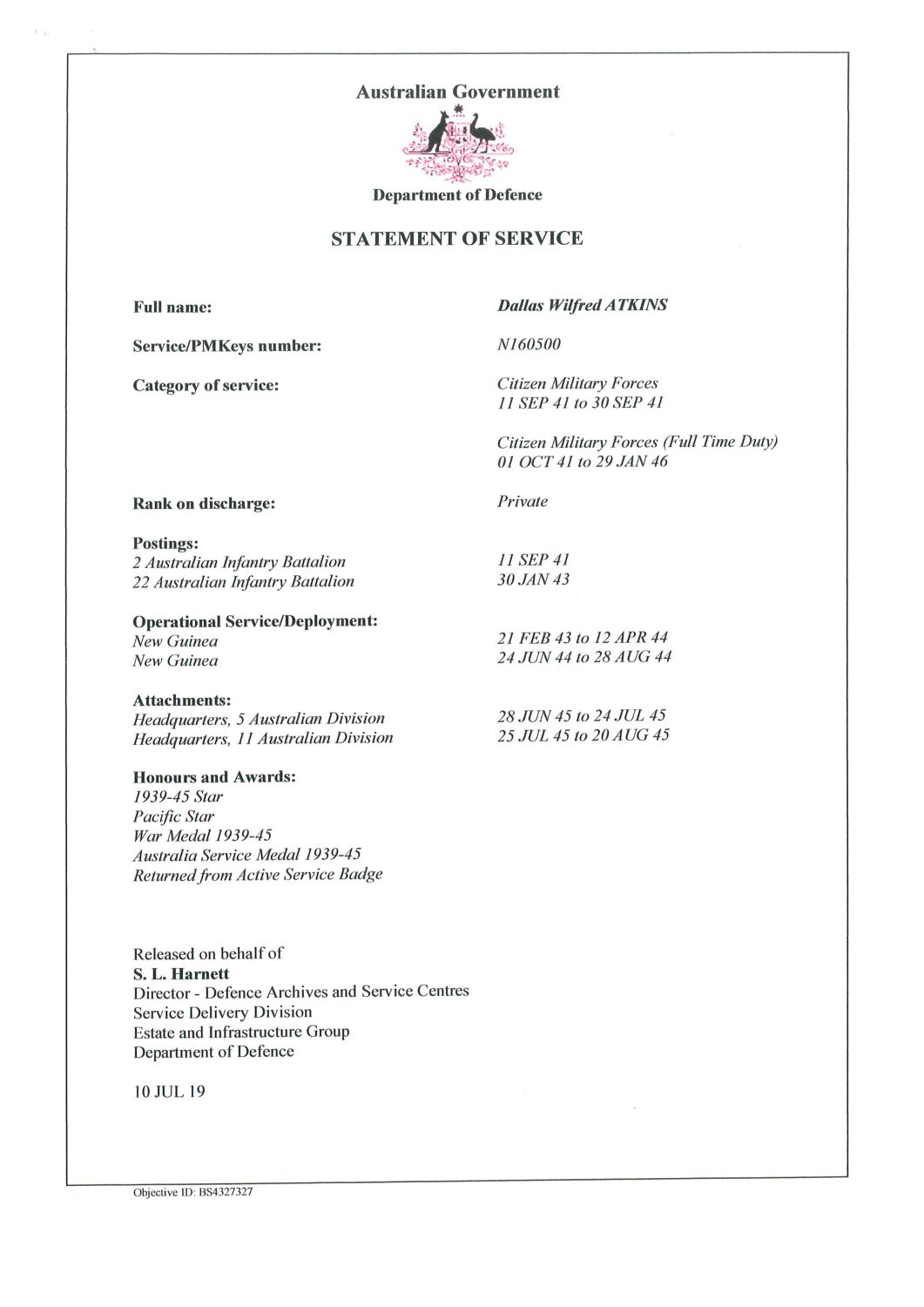