Word was received by his parents, Mr and Mrs Samuel Unger, of Upper Lansdowne, of the death of their son, Sergeant-Observer Stanley Unger, on active service with the Air Force in the Middle East.

The news has been received with the greatest regret in Coffs Harbour, where deceased was on the staff of the Primary School for about 15 months prior to resigning to join the Air Force about 15 months ago.  He was a splendid teacher and a man liked by both teachers and children, and admired by all who knew him for his manly bearing and excellent character.

Addressing the children at the Primary School, the Headmaster, Mr S G Marshall, referred to the deceased airman in the highest terms and expressed very deep regret at his passing.  “He was one of the cleanest living and hardest-working men who ever lived” said Mr Marshall.  “He was untiring in his efforts for the welfare of the children, the possessor of a wonderful character, and a man who never spared himself in the interest of others.  In every way he was an outstanding example to young and old.  The Department of Education,” Mr Marshall added, “suffers a very heavy loss by the death of such a capable teacher, who had a very promising future before him in the Department and assuredly would have risen to a high place in the service had he lived.  That future he has sacrificed for the good of mankind, and we honour his memory”.

The flag at the school was flown at half mast as a tribute to the late Sergt. Observer Unger. 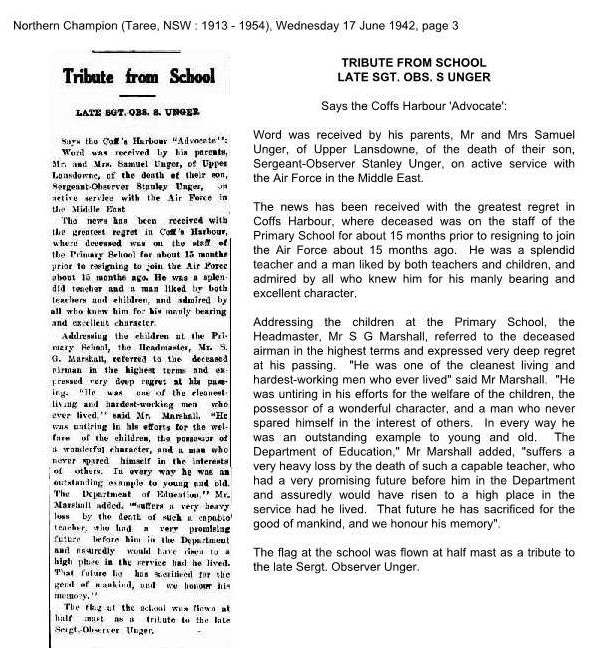