A little over a year ago a public meeting was held at Upper Lansdowne, the result of which was that a committee was appointed to proceed with the erection of a suitable memorial hall. A canvass was made for funds and the committee acquired a splendid site for the building from Mr Jas. Crittenden of West Maitland, and formerly of Lansdowne.

Mr W Fenning, of the Upper Lansdowne school, designed the building, in collaboration with Mr James Ritchie, and the result of their efforts is a hall of which much larger districts than Upper Lansdowne might well be proud.

The building is of rusticated weatherboard, ceiled and lined throughout with local timber. The overall dimensions of the building are 84ft including a main hall 60ft x 30ft, with a 30ft x 11ft stage. On either side of the front entrance is a committee room and a meeting room – the former measuring 13 feet x 12 ft., and the latter 22ft x 12 ft. Adjoining the meeting room is a supper room 50ft x 10ft. Water is available, and a copper has been placed inside, so that everything is nice and convenient for the arranging of meals. At the back of the stage are two dressing rooms, each 13ft x 10ft. The 12 windows and four fanlights were turned out by Atkins Bros. who also manufactured some of the doors, the remainder being made on the job by the builder, Mr Ritchie. The main hall is nicely floored and should be popular with dancers. Seats, capable of accommodating 200 persons, are also provided. The hall is brightly illuminated with electricity, the dynamo and engine being housed at the rear of the hall. The building was constructed by Mr Jas. Ritchie, assisted by Mr John McLaughlin, and a number of voluntary workers.

On Wednesday afternoon last the hall was the meeting-place for hundreds of residents of the Lansdowne district and also for visitors from Taree and other parts of the Manning.

During the afternoon picnic sports were carried out and at about 3.30pm everyone assembled in front of the building for the official opening.

The president of the committee (Mr W McLaughlin) briefly outlined the history of the movement to build the memorial hall and sincerely thanked the residents for the splendid response they had made to the call for funds. He hoped that they would continue to support the hall, which was a credit to the district. He thanked the visitors for their presence and also Mr Vincent for coming such a long distance to open the building. He was a “Digger”, and therefore was one of the best. He had fought their battles on the other side, and was now fighting for Oxley in Parliament. He then called on Mr Vincent to open the hall.

Mr Vincent first of all thanked the committee for inviting him to be present. It was decided to open the hall some months ago, but wet weather prevented the function being held. He was to have opened the hall then, but was in Melbourne when the telegram arrived notifying him of the postponement, and came to Taree before he found out that it had been postponed. He was pleased that they had fine weather on the present occasion. He did not intend to speak on political matters; but thought that some reference to Repatriation would not be out of place. When the soldiers returned from the war the Commonwealth launched a repatriation scheme to settle them on the land; land values were then at the peak and had since declined, so that today soldiers were on properties which were highly over-capitalised, and on which they could not succeed. He was pleased to see that the Commonwealth Government had recognised the position and had decided that if the States would do something similar they would drop these valuations by £4,000 or £5,000. If the States would do this the soldiers would be on a better basis, with a chance of making a success of their holdings. If something drastic was not done to stop the rot, the majority of the soldiers would be forced to leave their holdings and the Commonwealth would lose more than it would by taking time by the fore-lock and reducing the valuations. Australia, although one of the youngest countries, had, through the bravery of its sons and daughters, gathered a wealth of tradition, which would be an inspiration to the people for ages to come. Not even Rome, in all her glory, had any more reason to be proud of the feats of arms of her sons than had Australia of the heroism of her soldiers at Gallipoli, France and Belgium. They did not go to fight for Australia or the Empire alone, but for the world and civilisation, which was endangered. Men from Australia were born in an atmosphere of freedom and sunshine and when the freedom of small nations was endangered they joined hands to prevent those people from being trampled underfoot. 40,000 Australians lying on foreign soil was testimony to the heavy price paid for an idea. The question was sometimes raised as to whether the price paid was too great – but was any price too great to pay for freedom from the beastiality which ravaged France and Belgium in 1914? Every soldier who paid the supreme sacrifice would do it a thousand times to safeguard Australia from the treatment meted out to France and Belgium. If the people lived up to the ideals shown by the soldiers the price paid would not have been paid in vain. On those who remained devolved the duty of seeing that Australia was built up as a sanctuary for the British races. Throughout N.S. Wales and the Commonwealth the people of various towns were perpetuating the memory of those who fought. At Upper Lansdowne the people had erected a memorial hall wherein they would be able to meet to discuss matters of welfare and progress for the district. He was sure that they would never forget the reason for the erection of the hall. As the years passed, the building would naturally decay, but he did not think the memory of those whom it commemorated would ever decay. He congratulated the residents on building such a fine hall. He recently opened a memorial hall at West Wyalong which cost £10,000 but there were 10,000 people in that district. Upper Lansdowne, with a population of 300 or 400, had erected a hall worth £800 or £1000, so they had comparatively built a better hall than the one at Wyalong. He had very much pleasure in declaring the hall open and in dedicating it to the memory of those who enlisted from the district.

Canon Ritchie expressed his pleasure at being present. He was always ready to say a word about the soldiers of the country of which he was a native and of which he belonged. He was glad to see that they were commemorating the memory of the men who fought and fell. There was no need to tell of the bravery of Australia’s men. They did not know fear. They went out to do a job and did it well, crowning Australia with glory and themselves with honor. Some people asked what was the use of spending money on memorials. He did not think that it was a waste of money to build a memorial hall. The empire had spent millions of pounds in memorials so that the self-sacrifice of the soldiers would be perpetuated. Only by self-sacrifice could they build a nation. He was proud that when the call came our men did not hang back. They did well, and the people should honor them and remember their spirit of self-sacrifice. The builders had put their best into the hall, which he hoped would serve for many years.

Mr Harry Hammond of Ghinni, said that he was pleased to say a word or two. In September 1882, he pitched his tent on a site near the hall they were opening. The surrounding country was standing scrub, and when he left his tent, he did not go too far, as he was afraid of getting lost. He considered that the district had since advanced more than any centre on the North Coast. The only drawback was the bad state of the roads. Some parts of the road over which he travelled that day were not as good as the roads of 43 years ago. The roads between Kundle and Lansdowne bridge were particularly bad. If the progress of the district continued it would be one of the finest centres in Australia in another 30 years.

Mr W McLaughlin explained that the committee did not have sufficient funds to light the hall when it was completed, so Mr Jas. Ritchie agreed to install the electric light and to accept repayment at the convenience of the committee. The district was under a debt of gratitude to Mr Ritchie for his generous action.

Mr W Fenning (treasurer) said that visitors had admired the appearance of the hall. When it was decided to build the hall over £200 was subscribed. The people of the district were very patriotic. This was shown about ten years ago when certificates were awarded to schools raising the largest sum of money for the War Chest, in proportion to attendance, one of which was gained by the Upper Lansdowne school. He hoped that they would make a real Memorial Hall of the new building by making the returned soldiers life members. The hall cost £805 and about £668 remained to be paid off.

Mr W McLaughlin moved a vote of thanks to Mr Vincent for opening the hall, which was carried by acclamation.

Mr Vincent, in responding, said that it was his duty to visit the outlying centres when he could. He was through the district last spring. Evidently the spirit that dominated the pioneers had won through, as was manifested in the locality. He paid a tribute to the good women of Australia, who saw to it that their sons, brothers and friends wanted for nothing at the war. They made the fight easier and no memorial should be opened without paying a tribute to their self-sacrifice, energy and perseverance in making and forwarding comforts for the soldiers.

Those who had not previously seen the hall then had a look over it.

In the supper-room choice afternoon tea was available at a small sum.

At night the hall was comfortably filled for the concert, each item of which was generously received by the audience. The door-takings amounted to £45, and the takings for the day totalled over £80. 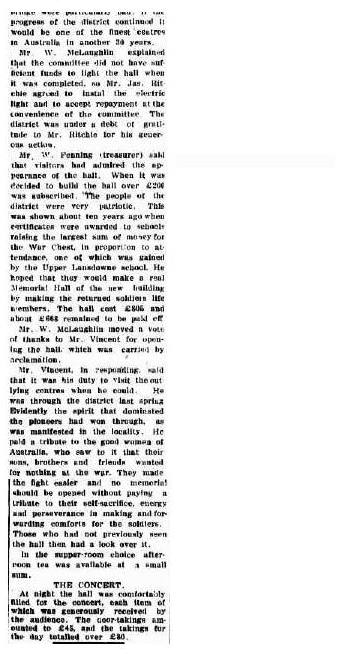