The foundation stone of Upper Lansdowne Memorial Hall was laid on Saturday 21st inst., by Mrs Cicolini in the presence of a fair number of enthusiastic workers for the new hall.

Mr W McLaughlin (chairman of committee) was in charge of proceedings, and in his opening speech outlined the history of the movement since a resolution was passed and a committee was appointed by the largest public meeting held in Upper Lansdowne, to build a memorial hall in a more central position.

A fine block of land was secured from Mr Jas. Crittenden opposite the residence of the public school. Mr Crittenden giving a substantial donation.

A call for voluntary offers of cash and labour was heartily responded to, the committee having already received promises and cash to the value of nearly £200.

Mr McLaughlin thanked all for their generous support and called upon Mrs M J Cicolini to lay the foundation stone. Mrs Cicolini then laid the stone, which had been prepared by Mr Edstein of Taree.

In response to Mrs Cicolini’s remark that the stone would be better if covered, the sum of £29/10/6 was immediately placed on the stone.

Mr McLaughlin then called upon Mr Fennings to present Mrs Cicolini with a jardinière as a memento of the occasion.

Mr Fennings in making the presentation, remarked that the present was not of the usual style on account of the stone being laid by a lady. There was no person more worthy of the honor than Mrs Cicolini, she being a pioneer of the district, and all her sons having served their country in the Great War, and she had been a remarkable worker in securing and providing war comforts for the soldiers. He hoped that Mrs Cicolini would be long spared to enjoy many pleasant evenings in the new hall.

Mrs Cicolini suitably responded in a few words of thanks to the committee.

A basket picnic was then enjoyed by those assembled.

The Memorial Hall will be a wooden structure 82ft x 40ft. The main hall is to be 60ft x 30ft. There is also to be provision for ladies and gents rooms, supper room, library room and a children’s room.

The building was designed by Messrs Fennings and A J Ritchie two of the committee, with Mr Ritchie supervising the work of erection. 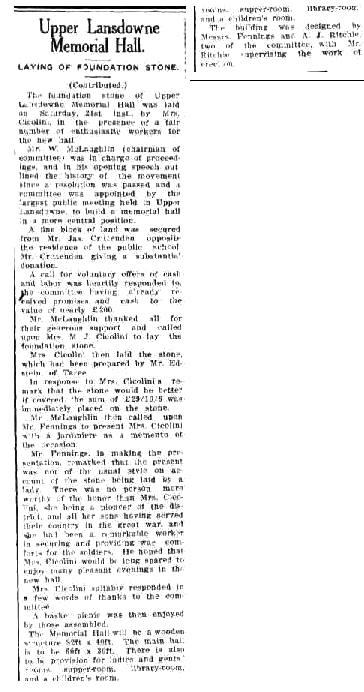