Horace and his brothers all attended Upper Lansdowne Public School.

Horace was 21 years and 1 month, his occupation listed as Labourer and gave his mother, Mary Cicolini of Upper Lansdowne, as his next of kin when he enlisted at Newcastle on 10 August 1915. He was farewelled in style at Upper Lansdowne. The Richmond River Herald reported on 19 November 1915 that: ‘Trooper Horace Cicolini, a young man, apparently of Italian descent, has no occasion to complain of the warmth and sincerity of his farewell at Upper Lansdowne (Manning river). The press hail him as “Upper Lansdowne’s noblest son,” and spreads itself out as great length to record the kind things said of the young fellow. A striking feature of the send-off was the number and usefulness of the gifts.’ (A full list follows). He also was allocated to the 7th Light Horse, 14th Reinforcements. He left Sydney on the “Malakuta” with his brothers John and Raymond on 16 March 1916. Horace was taken on the strength of the 2nd Light Horse on 23 April 1916 at Tel-el-Kebir. He embarked for overseas on the 25 May 1916 from Alexandria. He was transferred to the Artillery as a Gunner on 27 June 1916. He moved to the French theatre of war and was appointed a Motor Transport Driver on 8 March 1917. Horace was given leave to England in August 1917 but was 22 hours late back and consequently forfeited three days pay. His next period of leave was taken on 16 August 1918 and he used it to travel to Paris. He had a third period of leave on 24 September 1918 and this time was two days late in returning and lost four days pay. On 15 April 1919 he finally returned to England to await a ship to Australia. It was not until 2 June 1919 that he actually boarded the “Beltana”, along with his brother John, for his return journey to Australia.

A Link to his Active Service Form is here.

Horace was awarded the British War Medal and Victory Medal. He died in Sydney on 17 August 1970 aged 76 years 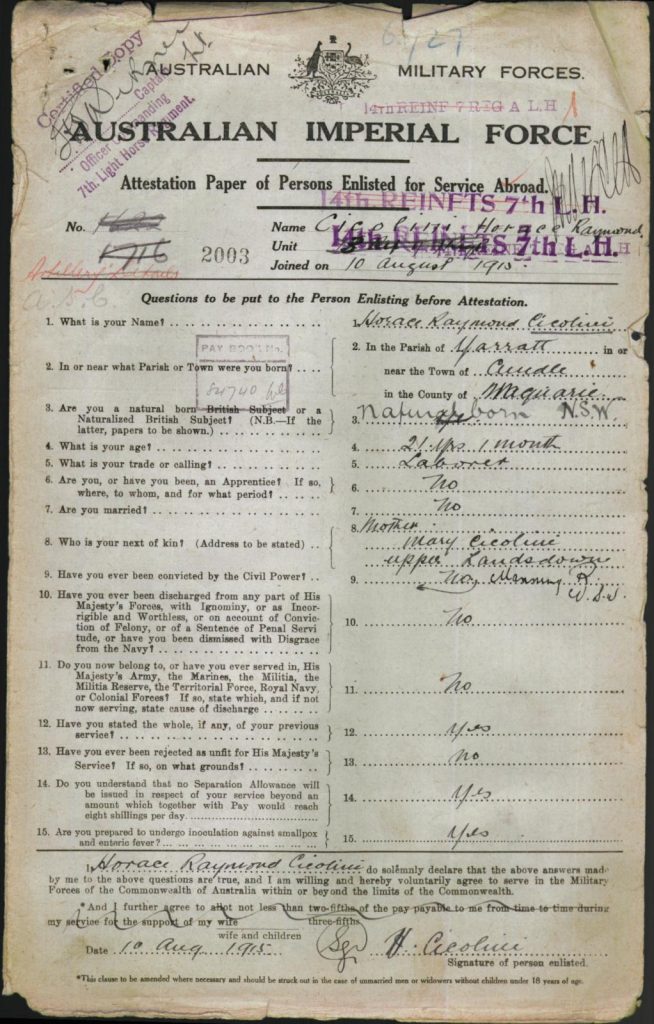 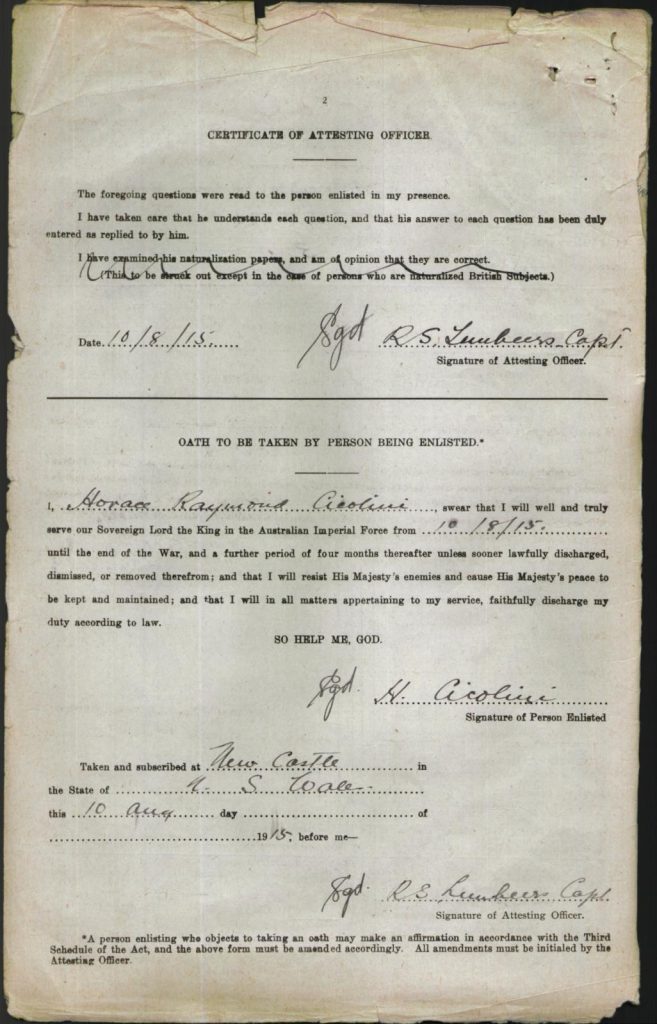 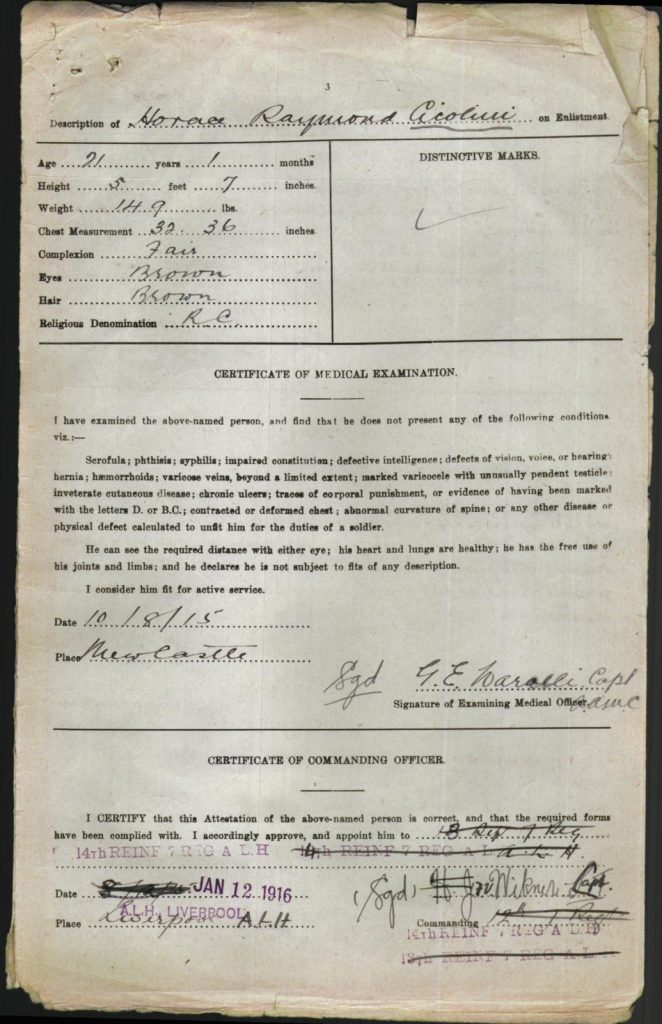 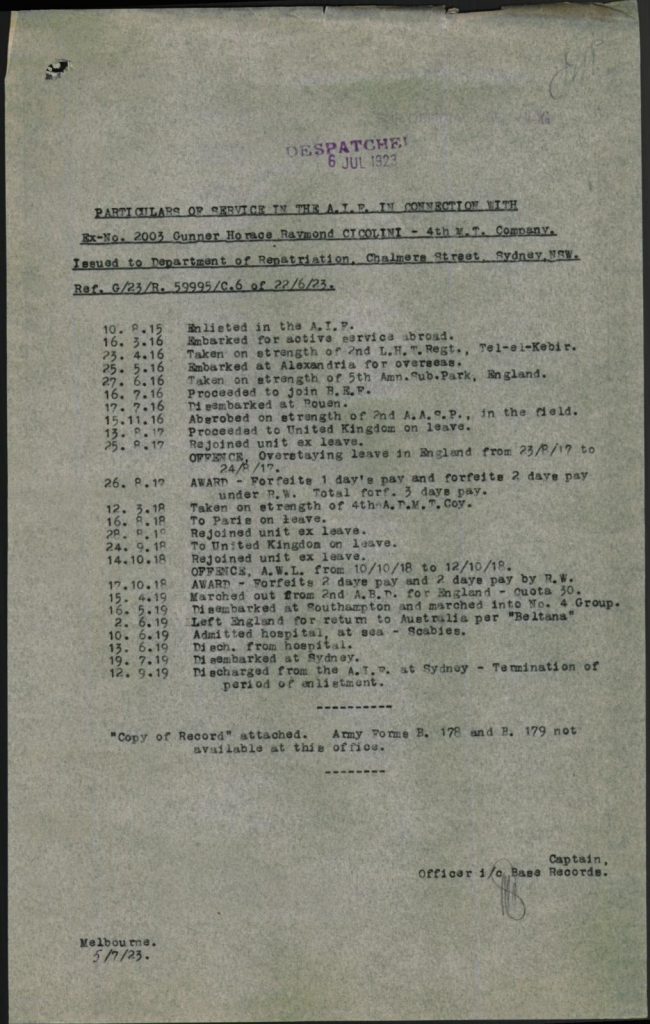